Texas has one of the most stable and growing economies in the USA. With growth comes interest in business relationship building, social interaction, and online marketing. Marketing Abilene Texas, Lubbock Texas, and West Texas is important for growth. It allows us to reach out to areas with larger populations which basically closes the distance. With only a couple hours a day we can create new relationships by simply posting and working with online groups.

This has created an interesting dynamic to occur which I would like to refer to as the online social graph.

What this means is that applications, websites, and the web is becoming more about relationships and less about the technology that we use. Connecting people to each other using groups is what we desire in general and Facebook lets us focus on this natural behavior. The great thing about Facebook is that it is simple to create an online relationship which remains unless we purposely delete the relationship. People in general want to create their own profile that represents their personality which also gives them voice with in a group.

People are now more focused on becoming the writers and are not just the readers. Now why is this important? Well, we need to first look at a web site called Flickr. Flickr.com 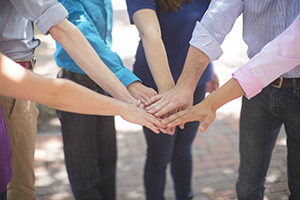 launched in 2004. The site lets us maintain a profile with pictures. A picture uploaded into the site is difficult to find without associations. These connections come from what we call Meta Data. Meta Data is defined simply as Data that describes other data. For Flickr.com this means that user inputted words describe the pictures. This makes the site now searchable based on user generated content.

The landscape of the internet has dramatically change since the 1990’s with the inception of the World Wide Web. Thanks to the inventor Tim Berners-Lee of the WWW we saw improvements in email, instant messages, and web conferencing applications. The change revolutionized how people are able to connect and maintain this connection of time. Facebook was not the first social networking site, but what facebook did well was stay simple and track these connections. Now Facebook is in the top used sites in the world.

Now this same concept can be applied to Facebook. Users are happily adding content to Facebook out of their own desire to create an online personality and creating a voice. This information being posted comes in many forms or different types of Digital media from written content, video, and pictures. All this content can be searched for marketing purposes as the connections between all this data has been created.

The future from what I can tell will be focused on social filtering.